Caught by Trap …In Croc Infested Waters! (Click on photos to enlarge)

Darwin, NT, Australia has some of the best fishing in the world; despite the dangers of salt water crocodiles. The scene looks beautiful put the photos can’t capture the inferno like temperature or the constant buzz of insects! Our croc loving friend, Troy Walsh, took us on this treacherous adventure with promises of a seafood feast upon completion. His promises were accompanied by far to little sunscreen, shade or bug spray! 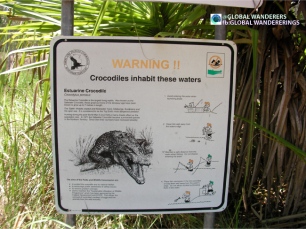 The Warning Signs are Everywhere!

Ready to place the traps. 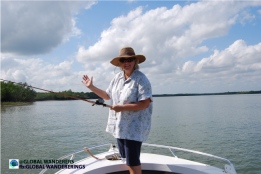 Lynne hoping for a Big Barra! 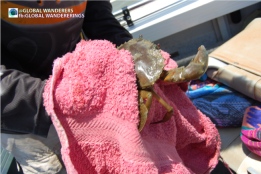 Just a small one. Mud Crab, not barra. 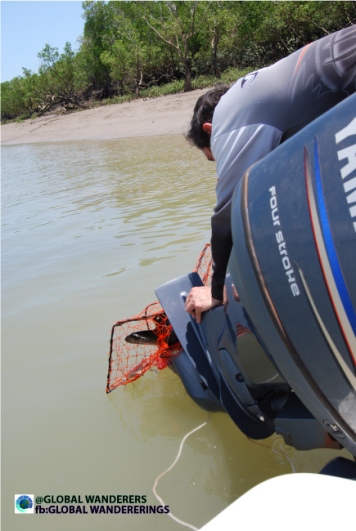 They can be lurking anywhere. 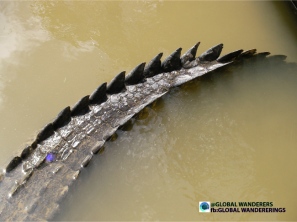 Be on the lookout. 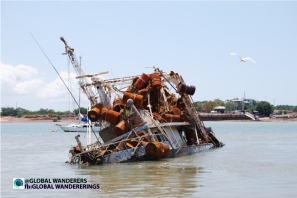 After five hours on the water, it is with a sense of accomplishment and heightened survival skills that I can now report ~ we caught a few small fish but ~ Troy’s big barramundi got away. We trapped a few small mud crabs but ~ then the boat propeller got twisted in one of the traps.

And we were stalked by a crocodile ~ while Troy was dangling off the stern, untangling the prop! Lynne became the lookout while I held on to Troy tightly, promising to pull his armless body back on the boat no matter what happened! Bravely Captain Troy dislodged the now mangled crab trap and untangled the propeller without being attacked!

It’s always considered a good day in the Top End when you make it home with all your limbs!! Our skin was blistered by the tropical sun’s passionate kisses and we had hundreds of midgee (sand-fly) bites but ~ what’s that compared to the bite of a crocodile?/!

Travel On! Join us as we travel into the unknown.

OR sign up to hear about our Global Wanderings Book Release

… BOOK OF OUR ADVENTURES OUT SOON! …

Yes, I want to READ the Book! Please let me know when it's released and any other travel adventures...